At Boras Cotton we have a wide vairety of patterned cotton fabric. All our cotton fabrics are in high quality.

Long time into the 1960-ies a lot of Swedish fabric manufacturers bought the lion share of designs abroad and printed them in Sweden. Most of the designs came from Paris.

But already in the 50-ies and early 60-ies the textile designers in Sweden got tired of just recolouring patterns bought abroad.

Designers like Göta Trägårdh, Inez Svensson and others started to persuade manufacturers to use works by local talents instead of imported designs from Paris.

One example is Mona Björk who in the late 50 ies took the chance, when salesdirector was abroad, and made the design “Köksgardin” that later became a sales success for Tuppen in Norrköping.

Göta Trägårdh, one of the founders of Beckman’s school, was head teacher in the modeling line for many years. She was a Swedish pioneer in fashion design, fashion illustrator and textile pattern designer. For 10 years she was the artistic director of STOBO textile (1954-1964).

STOBO was forerunners when it comes to giving designers freedom to create new expressions. Many students from Beckmans was invited to create new patterns.

The praise in the press gave STOBO a head start and everyone wanted to see the new fabrics, but STOBO never became the sales success they had hoped. They were perhaps too early for the sometimes conservative distribution channels and their export business did not have time to develop.

Göta Trägårdh moved on to work for Strömma in Norrköping, where she continued to create new designs and employing and teaching new talents.

Her assistant Inez Svensson at STOBO came to Borås Cotton (Borås Wäfveri) 1957 and continued the work to push for locally designed patterns. She made many successful designs of patterned cotton fabric for Borås, for example Camelot 1965, until she moved on to among other things create the internationally renowned design collective 10-gruppen.

Sven Fristedt another Beckman student educated under the wings of Göta Trägårdh, started to work fulltime at Borås 1965 after a couple of years of making design on a free lance basis. He remained with Borås for a long time as late as 2016 he sent us a new version of the classic Glada Blad. The new design Happy Leaves was printed and launched in 2020.

1983 Göta Trägårdh, at an age of almost 80, made some new fresh now classic designs for Borås. Among the designs Cosmos and Rapid are still in the collection. At the same time Borås took up design Japan that Göta Trägårdh made for STOBO in 1953.

Mona Björk started at “Tuppen” in Norrköping and continued via Mölnlycke Väveri to Borås where she made several classic designs of patterned cotton fabric, among them Malaga still a bestseller in Japan. Ann-Cathrine Sigrid came to work for Borås in the late 1980-ies and also she added famous classics to Borås collections.

Her designs Birdland and Fägring Stor from early 2000 are still top sellers. 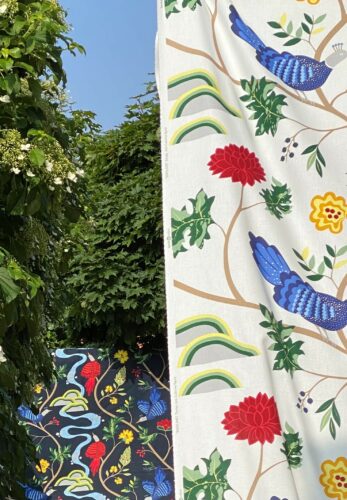 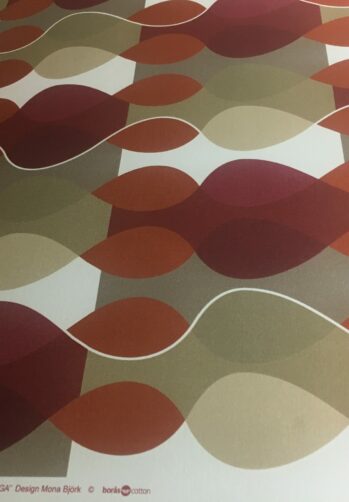