The most common fibre in the world. It is a synthetic fibre made from petrochemicals. Due to its melt spinning process the properties can vary from thin to thick, and colours has no limits.

The fibre gives the fabric strength and less shrinkage. Polyester can easily be washed in 60 degrees.

FR Polyester / Trevira CS gets the inflammability during spinning process so the non flammability is inside the fibre and can not be washed away.

Trevira CS is a patent of FR Polyester that has expired and now available for everyone but not under the trademark Trevira CS.

Plant fibre with properties well suitable for bed linen, curtains and clothes. The fibre is made from the flax stalks and process decide the quality of the final yarn.

Plant fibre commonly used in clothes and home textiles due to its softness. Fibre length is giving the fibre its properties and quality.

The fibre is deciding what options of different dye stuff and dyeing techniques that can be used.

Digital printing can be compared with a normal printer used for paper. Either you print directly on to the fabric or a transfer paper is used to transfer the print on to the fabric. This technique reduces the water consumption during process and the small amount of meters that can be printed is from 0 and up.

Screen printing is made in big machines where ”graverade” rolls are used to get the print. This technique has colour limits since one roll in the machine stands for one colour. Limit is usually 12 rolls.

DIN 4102 is a German standard which measure the reaction to fire. If the curtain is approved as FR according to the standard it is marked with B1

NF P 902-503 is a French standard which is doing test according to an electrical heater. The result M1 is the highest in this standard and tells that the fabric will not continue burning.

EN 13773 is a European standard where the results class 1 gives the result no ignition.

BS 5867 is a standard from U.K. which is known for its cigarette test.

Many of Borås Cotton fabrics are printed with different colours and patterns. The fabrics should remain the same after certain time of use and washings. Colour fastness can be tested in different ways.

When doing the test according to standard ISO 105-B02:2014 Colour Fastness to artificial light the fabric is put in a chamber with specific temperature, humidity and time. The result will be compared with a standardized level between 1-8, where 8 is the best with no changes.

The standard ISO 105:C06:2010 Colour Fastness after washing the fabric is washed according to a standardized program with given temperature. The result is given within a level of 1-5, where 5 is the best with no changes in colour.

HOW IS SOUND ABSORBTION MEASURED?

Sound absorption is measured according to the standard ISO354:2003.

A test report from ISO354:2003 gives a result that can be compared between different qualities and helps the line of business to calculate the optimal design for the designated environment.

HOW IS IT TESTED?

The test is done in a specialized acoustics chamber where the background noise is very low. The fabric is mounted 10 cm away from the wall in one part of the room. The absorption is tested with the fabric stretched flat and pleated. The test measures the duration in seconds to reduce a 60dB sound wave in frequencies between 100 and 5000 Hz. The reverberation is measured thus resulting in absorption level. BORÅS COTTON tests its fabrics at Akustikverkstan; www.akustikverkstan.se

WHAT RESULT IS GOOD?

Absorption levels are rated from A-E, where A is the best.

HOW TO USE THE RESULT?

The rooms design is the most important when adding the different levels of sound absorption textiles. A level C rated textile can be sufficient in an approved level A room. 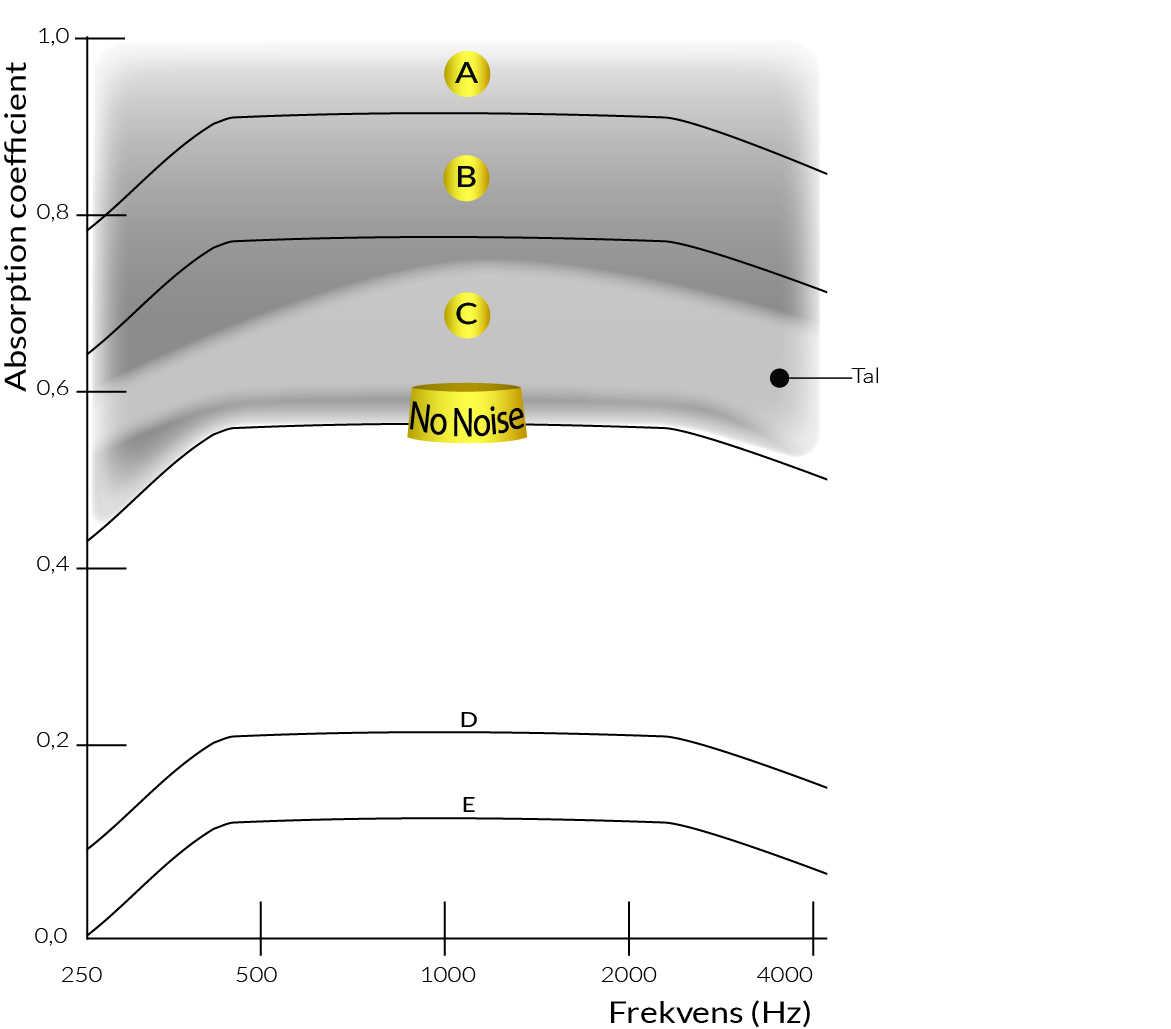 We have a responsibility to our customers and suppliers to constantly work for a better, safer and ethical production. To guide us in this important job we have our Code of Conduct which is based on ILOs conventions for human rights and EUs chemical law REACH. At Borås Cotton we consider the environmental impact in the production, transport, use and disposal of our products and work to reduce our life cycle footprint.